Phil Lynch started writing poetry as a teenager and in the years following was involved in readings (including what became known as the Tara Telephone poetry readings) and the organization of poetry and music events. He also had work published and broadcast in those early years. He maintained an interest in writing and performing while getting on with the rest of his life, including several years living outside of Ireland, but it was a fairly sporadic involvement. 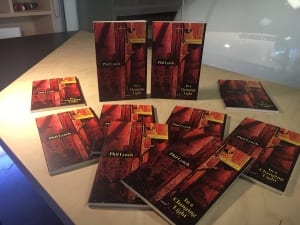 On returning to Dublin in late 2009 he cranked up the intensity of his writing activity and began performing his poetry at events and festivals around Ireland. Since then, he has had work published in a range of literary journals and anthologies. His first full poetry collection, In a Changing Light, (Salmon Poetry), was published in 2016.

Phil’s poetry has been featured on national and local radio in Ireland including on programmes such as the Arena Arts Show, The Poetry Programme, Sunday Miscellany and The Documentary on One. He has been shortlisted in a number of poetry competitions and was a runner-up in the iYeats Poetry Competition in 2014.

In 2018 he was the winner of the Intercompetitive Poetry Competition, a performance event of several rounds in which competitors to progress to the next stage were selected by means of a secret audience ballot on each occasion. 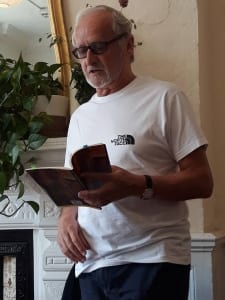 Balcony TV video: If St. Patrick could see us now

Live performance: In a Changing Light

Listen to Phil on Spotify: My Wife Thinks I’m at a Poetry Reading

It was nearly dark

when he came in from the fields

tired from the toils of the day

about the Tilley lamp still unlit,

would he have to light it himself

he asked of no one in particular.

In the shadow of an empty space

The men with the metal boots,

their belts heavy as a gunslinger’s,

that stretched across the countryside,

with giant spools of wire unfurled

along roads and lanes and fields.

I marvelled at how they scaled

the heights of those black poles

and worked at right angles to the ground

In the countdown to dusk I waited

finger on the switch

as if to take its pulse

with his thumb on the red button

waiting for the order to push.

from my mother at the table

and with all the strength

in my bony digit

I flicked the magic switch.

Outside, the dusk turned instantly to dark.

Inside, the light would never be the same. 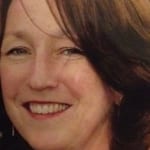 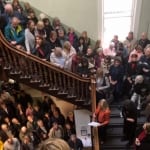